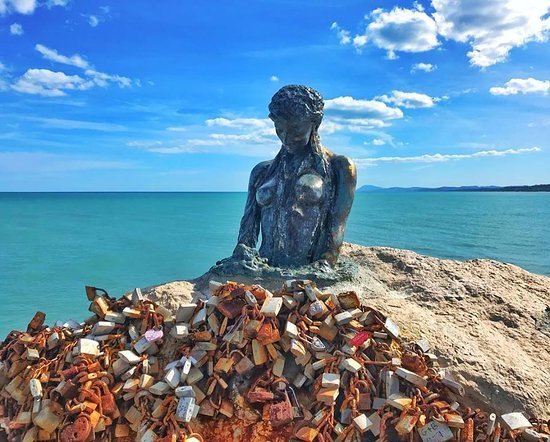 When it comes to Senigallia, two images are immediately put together: that of the “Velvet Beach” and that of the “Rotonda sul mare”, which inspired the singer Fred Bongusto with a cult song from the 60s. La Rotonda a mare it is an imposing seaside structure overlooking the sea of Senigallia and was designed by the architect Vincenzo Ghinelli who in the immediate post-war period designed this building on stilts. It became the symbol of social life and musical entertainment during the 1960s thanks to the artistic and cultural vitality of the city. A point of reference and aggregation that still seduces today as in the past.

Every year in Senigallia the Night of the Rotonda is organized, a party for the “birthday” of the Rotonda a Mare with shows and celebrations from sunset until sunrise. During the festival, magnificent baroque fires are organized on the sea, many shows, music and shops open on the seafront and in the historic center to entertain the thousands of citizens and tourists visiting for the occasion.

Senigallia remains a top destination for carefree holidays between sun, sea, good food, romantic evenings and a pinch of culture, which never hurts. Here the atmosphere is decidedly soft, just like the sand of the mythical “velvet beach”, famous all over the world for its fine sand.

Thirteen kilometers of beach on which the coveted Blue Flag flies, a guarantee of water quality and virtuous environmental management.

More than one hundred accommodation facilities are available to guests including hotels and campsites. And then, bathing establishments, bars, restaurants, pizzerias, discos.

In addition to the sea, Senigallia also offers a delightful historical center to its visitors, immediately close to the beaches and therefore easily accessible on foot or by bicycle.

In Piazza del Duca you can visit the Palazzo del Duca and Palazzetto Baviera in all their splendor.

From here you shall reach the Rocca Roveresca, with its fascinating pier that connects it to the square in front. A castle inside the city now home to exhibitions and cultural events.

And again, the characteristic Portici Ercolani, which line the right bank of the Misa with a suggestive sequence of one hundred and twenty-six arches in Istrian stone.

Do not miss the sunset in the company of the Little Mermaid, better known as the Penelope of Senigallia, or the statue of Gianni Guerra who since 2004 “watches over” the Senigallian pier.

Senigallia is also a set of flavors and aromas that reflect the ancient Marche cooking tradition. Genuine, simple dishes, which are combined with the high quality of blue fish and typical of the hinterland. Among these: the renowned “Senigallian brodetto”, grilled and mixed fried fish from the Adriatic, as well as roast goose or porchetta, which are just some of the flavors to be discovered accompanied by wines capable of conquering the most refined palates: Verdicchio di Jesi, Bianchello del Metauro, or reds such as Lacrima di Morro d’Alba and Rosso Conero.

In short, Senigallia is a destination that offers a complete and unforgettable holiday! 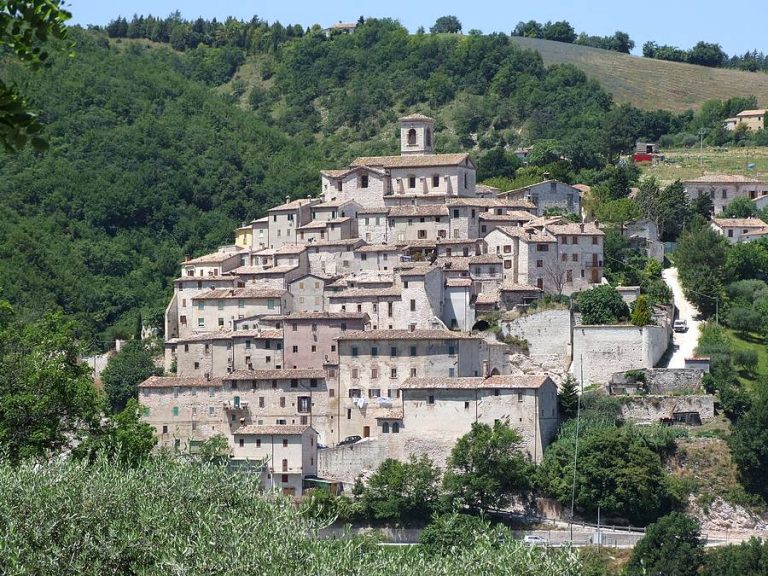 The territory of Arcevia is dotted with nine medieval castles where time seems to stand still. The nine castles of Arcevia are fifteenth-fifteenth century villages, with the houses surrounded and protected by the original city walls, from which you can enjoy splendid views.

They are located in small inhabited centers of considerable historical-artistic importance that deserve to be visited one by one: Avacelli, Castiglioni, Caudino, Loretello, Montale, Nidastore, Piticchio, Palazzo and San Pietro in Musio.

The conformation of the landscape makes each location particularly suitable for walks and excursions, including mountain biking. Monte della Croce and Monte Sant’Angelo are furrowed by suggestive paths that can be easily traveled.

The nine castles of Arcevia: discovering the treasures of the villages

Castles of Arcevia: Avacelli, the castle of the Templar church

It is one of the most important castles of Arcevia and will amaze you with the beauty of its dense landscape of woods. It is in fact a few km away from the Regional Natural Park of the Gola della Rossa and Frasassi (of which it belongs), towards Serra S. Quirico.

The castle dates back to the end of the 14th century and the beautiful entrance door and part of the stone walls remain of the ancient defensive structure. At the entrance of the castle you will be greeted by a small and pretty little square overlooked by the church of San Lorenzo (dating back to the second half of the 15th century) where we advise you to enter to admire a spectacular painted terracotta dossal representing the Madonna della Misericordia (17th century).

After walking through the alleys, head to the foot of the hill, in a secluded valley in the bush. Here stands the church of Sant’Ansovino (11th century), the only local testimony of Romanesque architecture. The oldest document mentioned is from 1082 but certainly dating back to the previous century. According to tradition, it is owned by the Order of the Templars.

If you love asparagus we recommend you to come to Avacelli in May when a renowned festival dedicated to this vegetable takes place here.

Castles of Arcevia: Castiglioni,
the castle of bread

The Castiglioni Castle stands on a hill near the Misa river, has well-preserved walls dating back to the 1400s and a beautiful fortified gate. The watchtower has been transformed over the centuries into a bell tower.

Start your visit to this delightful stone village from the Church of Sant’Agata which opens onto a beautiful square with suggestive views. Inside the church is the Madonna del Rosario (1589), one of the best works by Ercole Ramazzani, and a wooden crucifix from the 15th century.

After browsing through the streets of the village, head outside the walls to reach the church of Santa Maria della Piana (13th century) which will surely strike you with its curious rectangular facade. Inside you can admire frescoes attributed to Andrea di Bartolo da Jesi (1474).

We advise you to visit Castiglioni at the end of September when the traditional bread festival takes place, two days in which the old oven and the old mill come back to life and you can enjoy the simple and genuine life of the past inside a village of other times.

audino is one of the smallest castles in Arcevia, set like a small pearl on the sides of the mountain. It can be reached by a winding road that crosses a beautiful forest. Today no one lives inside it but comes back to life in summer with the tourists who stay there for the holidays.

Appointed for the first time in 1338, Caudino retains the picturesque entrance portal and part of the ancient fortified structure. In the center, next to the ancient bell tower, stands the church of S. Stefano renovated in the 1700s, which houses a 16th century fresco depicting the Madonna of Loreto.

Castles of Arcevia: Loretello
The castle of love

Loretello is a real miniature castle nestled on a hill surrounded by green hilly landscape. It is one of the smallest walled villages in the region and among the castles of Arcevia it is the oldest.

It was in fact built in 1072 by the monks of Fonte Avellana and enlarged towards the end of the 1300s. Its walls and the beautiful three-arched access bridge have withstood the passage of time. The most important building is the fifteenth-century circular tower with most of the loopholes still visible. After walking through the ancient streets, we recommend you visit the museum of rural culture.

The entire Loretello area is characterized by the presence of traditional crops. The main crops are those of spelled, corn, grass peas, olive trees and vines, with high quality production.

The castle of montale is located on a circular hillock at 280 meters above sea level and is located on the border with the Municipality of Serra de ’Conti. Dating back to 1200, it perfectly preserves the medieval structure, enclosed within the walls.

You can take a dip in the past admiring the walkway and the watchtower, reused as a bell tower of the church of San Silvestro, from 1200, which has a side incorporated into the walls. Climbing up the bell tower you can also see Mount Conero.

Castles of Arcevia: Nidastore
where the goshawks lay their nest

The northernmost castle of Arcevia, on the border with the province of Pesaro, has a very particular name that you will not easily forget: Nidastore which means “nest of the goshawks”, that is the large birds of prey used for hunting in the Middle Ages, which also appear in his coat of arms.

It was built in the mid-twelfth century and the current settlement dates back to the second half of the fifteenth century. Here you can admire the well-preserved city walls on which the houses and some palaces with sixteenth-seventeenth-century portals in excellent condition rest.

Castles of Arcevia: Palazzo
The castle which is pure poetry

Equipped with powerful sections of stone and terracotta walls and two entrance doors, Palazzo d’Arcevia, once the most populous castle in Arcevia, is today a lump of alleys and ancient fortified houses clinging like a fan on the slopes of Mount Caudino.

Palazzo is poetry and from various angles from which you look at it it appears, at times, as planted in the rock, solid and proud; changing point of view it seems happily clinging to the mountain on which it stands and leaning even further away it almost seems to hover in the air and mix with the sky and clouds. At night it turns into a crib teeming with lights and shadows.

To admire are the parish church of Saints Settimio and Stefano (mid 18th century), probably the work of an exponent of the Vici family of architects, with marble altars and a beautiful eighteenth-century canvas from the Venetian school, and the private oratory of S. Venanzio (mid 18th century), erected on a project by Arcangelo Vici, with frescoed interior. 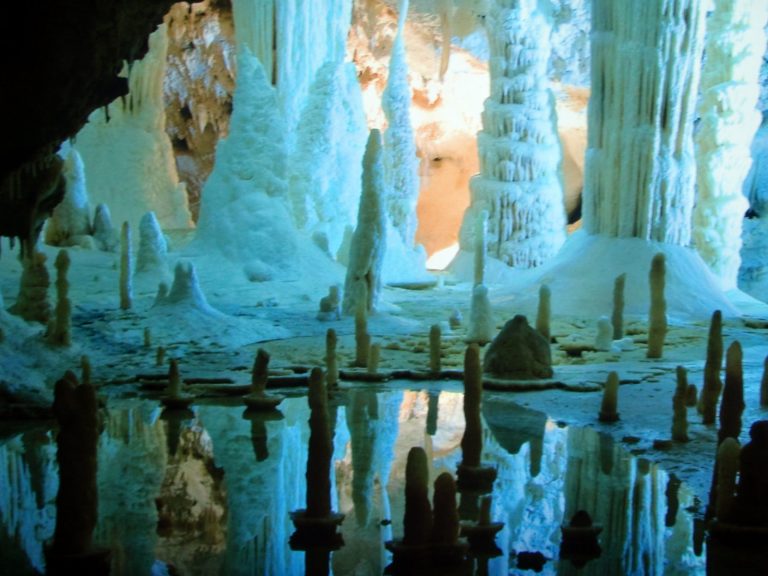 The wonderful Frasassi Caves – Italy’s greatest caverns and among the largest in Europe – are undoubtedly an attraction you should definitely visit while in Le Marche.

Le grotte di Frasassi (their Italian name) are Italy’s greatest caverns and among the largest in Europe, they are located in the municipality of Genga, 50 km south-west of Ancona. So, no matter where exactly in Le Marche you are staying, the caves, are located in the central part of the region and are easily accessible from all directions.

These masterpieces of nature have been given curious nicknames by speleologists, due to their particular shape: the Giants, the Camel, Madonnina, the Witches Castle, and many more! Moreover, the impressive caves along the path are enhanced with various light effects en route…for a dreamlike experience! If you like adventures and you are interested in exploring the caves and a deeper and far more remembering way, do not miss the two speleo-adventure trails: the blue path and the red path, appropriate for people over 12 years of age.

Moreover, don’t miss a visit to the tiny and picturesque medieval village of Genga, with its defensive walls and imposing castle perched on a hill overlooking the valley and the countryside of Marche. So, enjoy a relaxing walk down the streets and admire the medieval houses built right into the limestone…you’ll seem to go back in time!